Most major U.S. museums have said they will remain closed indefinitely because of the coronavirus. With operations grinding to a halt, institutions are beginning to announce layoffs and alterations to workers’ pay schedules. Below is a guide surveying those announcements.

— The Broad: The Los Angeles–based private museum will pay staff members who can’t work remotely until at least April 8.

— Los Angeles County Museum of Art: Officials at one of L.A.’s biggest institutions plan to keep paying all hourly and part-time employees for the whole time the museum is closed.

— Hammer Museum: On March 24, 150 part-time student workers were laid off at the Hammer. The museum said the laid-off workers would receive pay through April 10. (The Hammer is affiliated with the University of California, Los Angeles, which will not hold classes on its campuses through at least early June.) 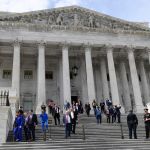 — Museum of Contemporary Art Los Angeles: Also on March 24, MOCA laid off its entire part-time staff. With its part-time employees representing 97 people out of its 185-person staff, that means the museum cut its workforce in half. MOCA has said it is hoping to bring its part-time workers back after the closure ends. Laid-off employees are to be paid through the end of March.

— Yerba Buena Center for the Arts: The San Francisco museum has made a public commitment to pay its employees for as long as possible.

— MASS MoCA: Based in North Adams, the museum said it would lay off 120 of its 165 employees. All employees will receive full payment through March 27. After that, until April 10, all workers will receive 70 percent of their normal pay. Laid-off employees will be covered by the museum’s health care plan through July 31.

— Metropolitan Museum of Art: Widely regarded as the role model for institutions across the nation, the Met has committed to paying all of its employees through April 4. As of March 20, the museum was still considering whether it would have to lay off or furlough any employees.

— Cleveland Museum of Art: On March 26, the CMA said it would furlough all of its part-timers and cut the wages of all non-unionized staff by 11 percent–15 percent. Any forthcoming projects with contractors were suspended.

— Carnegie Museums: The Pittsburgh-based consortium of museums—which includes the Carnegie Museum and the Andy Warhol Museum—said that it would furlough more than half of its employees. About 75 percent of those workers are part-timers.

The “End of Truth” Under the Trump Administration

Mixed Media Images of Ghana and its People by Tjaša Rener...