Dave Muller’s wall-size painting Dust Jacket #1 (NIM Strand), 2020, depicts a worn copy of the catalogue for a 1959 Museum of Modern Art exhibition curated by Peter Selz, “New Images of Man.” Muller faithfully reproduces the book’s flap text and title and the stark photograph of a Giacometti sculpture on its cover, as well as scuffs, stains, tears, and a price tag from the Strand: $3. Selz’s show advanced a brutalized sense of the human figure that was meant to represent a bloody century, but that was male- and Western-centric and that has weathered about as well the catalogue. Muller’s painting hung prominently in curator Alison M. Gingeras’s ambitious update on Selz’s show, which was as much a critique as an homage. In addition to pieces by a handful of artists from the original exhibition, like Karel Appel, Gingeras included works by midcentury female, non-Western, and Eastern European artists that Selz could have featured but didn’t, as well as works by contemporary troublers of the human figure, like Rachel Harrison. 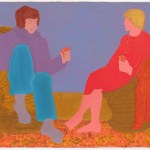 The flattened Giacometti in Muller’s painting provided a backdrop for a pair of 1960s statues by Alina Szapocznikow (one resin, one bronze) and Sarah Lucas’s Elf Warrior (2018), a reclining figure bearing a massive erection. Against Selz’s avatar, these works offered a more plastic but no less harsh take on the human subject. Such juxtapositions served to counter the masculine tenor of Selz’s exhibition. Gingeras’s rich revisionism was more explicit in New Images of Man Spread (p. 62–63, Annotated by Alison and Dave), 2020, another huge painting by Muller, this one made directly on the wall and portraying two pages of Selz’s catalogue that describe Jean Dubuffet’s rude images of women. Annotations that Muller and Gingeras made on the depicted text are a combo of careful reading and defacement. Installed atop the painting were works by self-taught artists—sculpted heads by Michel Nedjar and painted portraits by Carol Rama and Eugene Von Bruenchenhein.

Other revisionist gestures felt only slightly less dated than their target. Interpretation Willem de Kooning, for example, was an unattributed drawing that reimagined the painter’s toothy, screeching “Women” and lay on the floor under plexiglass. (Presumably no one would lend their real de Kooning to be used as a rug.) But upstairs, the museology of modern art gave way to looser, brighter, generally less tortured interpretations of the human form—for instance, Misleidys Castillo Pedroso’s 2016–18 drawings of Day-Glo musclemen and Ahmed Morsi’s 1986 painting of an empathy-laden, long-faced man and horse—emphasizing the absence, in Selz’s vision of “man,” of fecundity
and joy.

With a selection of photographs at the gallery entrance by Zofia Rydet and Deana Lawson, Gingeras also invoked another MoMA blockbuster dedicated to the figure, the 1955 photography exhibition “The Family of Man,” curated by Edward Steichen. Both Rydet and Lawson study the composition and context of the family unit, in communist Poland and contemporary America, respectively. Both pin their subjects to the middle of the frame, eschewing Steichen’s fuzzy humanism for a style that captures their specific humanity.

In reprising these shows, Gingeras articulates a strong faith that art is somehow responsible for, and responsive to, something essential about being human. This idea is worth repeating, especially when updated with a contemporary sense of intersectionality. But formally speaking, Gingeras’s selection of new new images (no digital art? no video? no performance?) was more conservative than the era it was meant to represent.

60,000 Bees Recreate the Nefertiti Bust and Other Classic Sculptures in Wax with Artist Tomáš Libertíny

A Photographer Captures Christmas Kitsch Across the US

Panelists reflect on a ‘pivotal week in Australian history’

60,000 Bees Recreate the Nefertiti Bust and Other Classic Sculptures in...