Oil and ranching heiress Anne Marion, a major patron of the arts who founded the Georgia O’Keeffe Museum in Santa Fe, New Mexico, died on Tuesday. She was 81.

Marion was a particularly pivotal force in the American Southwest, as the primary benefactor of the Modern Art Museum in her native Fort Worth, Texas. In the early 1980s, Marion noticed the museum’s cramped building only allowed for a small fraction of its holdings to be displayed. “I remember thinking, ‘What could we do about this?’ and I realized we couldn’t make a silk purse out of a sow’s ear,” she told the Star-Telegram in 2002. “We had to have a new building.” As chairwoman of the institution’s building committee, she selected Tadao Ando as the architect in 1997. 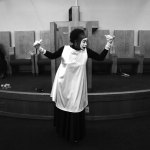 “Anne Marion was one of the most generous, admirable, and inspirational people I have ever known,” Marla Price, director of the Modern Art Museum, told ARTnews. “Her great leadership and generosity to the museum has continued until the present, and her loss is heartbreaking for everyone involved with the Modern.”

Around the same time, Marion and her then-husband, John, were approached by Stanley Marcus (of the Neiman Marcus empire), acting on the behest of the New Mexico Foundation for the Arts, to donate a few of their works by Georgia O’Keeffe to Santa Fe’s Museum of Fine Arts. Marion was an avid collector and appeared on the ARTnews Top 200 Collectors list in 1993 and 1994; she appeared again from 2002 through 2011 with John, who was the chairman and the chief auctioneer of Sotheby’s North America. After Marcus’s pitch, Marion decided instead to establish a privately owned, privately funded museum for O’Keeffe, and the Georgia O’Keeffe Museum—one of the first institutions in America dedicated to a female artist—opened in Santa Fe in 1997.

“I don’t think it ever would have happened [without private money],” Marcus told the Texas Monthly in 1999.

Anne Burnett Windfohr Marion had money to spare. She was born in Fort Worth, Texas in 1938, the great-granddaughter of Samuel Burk Burnett, founder of the 6666 Ranch in King County and patriarch of one of Texas’s wealthiest families. Her mother, Anne Valliant Burnett Tandy, was the daughter of a prominent rancher. Marion graduated from Briarcliff Junior College in Briarcliff Manor, New York, later attending the University of Texas in Austin. She studied art history at the University of Geneva in Switzerland. She served as the president of Burnett Ranches and the chairman of the Burnett Oil Company.

Among her list of honors are the Golden Deed award, the Charles Goodnight award, and the Governor’s Award for Excellence. She was also inducted into the Texas Business Hall of Fame.

Re-imagining of the short life of Shakespeare’s son is no Mantel...

Follow Colossal: Get the Best in Art, Design, and Visual Culture...

From the Incredible Rise of Yayoi Kusama to Europe’s Biggest Jewel...

A Blog By Saatchi Art

A House Becomes a Potent Site to Process the Grief and...