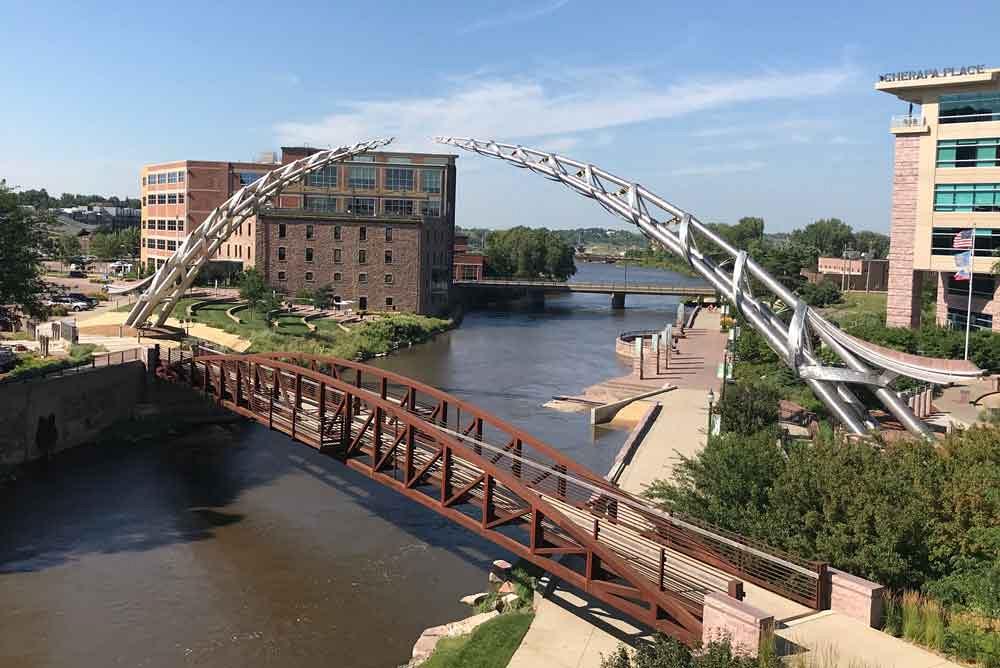 Along the Sioux Falls Riverwalk the “Arc of Dreams” soars over the Big Sioux River. Displays in an on-site museum depict its design, assembly, and erection.

Have you ever seen a dream come true? Did luck or a staunch belief in its possibility make it become a reality? In Sioux Falls, S.D., the “Arc of Dreams” sculpture spans the Big Sioux River as a reminder of what it often takes to make a dream come true—a leap of faith.

Dale Lamphere was contracted to design and build the large stainless steel sculpture as a signature piece of art for the city. Its basic idea and a rough sketch were provided by Sioux Falls’ SculptureWalk organization. Lamphere took it from there.

“To conceptualize the sculpture, I thought about the process of dreaming. An idea originates in our consciousness, and we can take it a certain distance. But at some point we have to trust ourselves and the future and take a leap of faith,” he said.

Two 150-ft. cantilevered stainless steel crescents are anchored in quartzite bedrock on each side of the river. They reach toward each other, mimicking the curve of prairie grass blowing in the wind.

Three exterior sections join to an interior truss and diminish in diameter until they end 70 ft. above the water. A 15-ft. gap represents the space—or synapse—that must be crossed to accomplish a dream.

A double helix with a mirror-polish gold interior wraps around the structures and reflects the sun as it moves throughout the day and colorful lighting projected on the sculpture at night. The stainless pipe was polished and textured by hand before fabrication to enhance it reflectivity.

The shape of the helix also helps deflect prairie winds that reach up to 80 miles per hour.

“I used prairie grasses that grow to 6 ft. tall and bend in the wind as my guide. They have an outer stem that grows and terminates in a leaf, another stem comes from that and terminates, and so on. When something in nature works structurally, we can assume it is a time-tested design.

“Each section of each arc was built using 11 sizes of 304 stainless pipe starting with 36-in. diameter and ending with 3-in. diameter. In succession, each smaller pipe was inserted up to 2 ft. into the larger pipe with a 1- to 2-in. drop. We added a plunger plate to each insertion, plug welded through to the plate, and welded it again where the smaller pipe exited. This created an intrinsically strong structure based on nature and provided a curve using straight pipe.”

The size and weight of the arcs, built in three sections, caused some engineering challenges. The 45-ft.-long base sections and 90-ft.-long tip sections weigh 13 and 15 tons each, respectively. The third element curving upwards from the base, the canopies, are each 37 ft. long and weigh 3 tons.

The major pipe run of each arc ends at a base plate with about twenty 11/2-in. mounting bolts secured in 4-ft.-thick concrete blocks. About 15 micropiles, smaller-diameter pilings, secure the concrete to pins epoxied into holes drilled 25 to 30 ft. down into the quartzite.

“We worked on one side of the river at a time for assembly and installation. The three sections were joined together, wrapped in the helix element, then the canopy was attached. Once assembled, we touched up the finish to recapture the texture,” Lamphere said. “Each side was lifted as one piece, placed on 2-in. plates that were already bolted to the base, and welded down. Each hole had only a 1/8-in. tolerance.”

More Than a Sculpture

Since its completion in July 2019, the “Arc of Dreams” has become more than a piece of art for the community that contributed to its funding. It has become the symbol of the progressive prairie city.

“It is always the expressive, creative edge that moves society forward—whether it’s literature, music, sculptures, or new business practices. My hope is that this sculpture will inspire future dreamers to face their challenges and trust in the promise of their own dreams,” Lamphere said.

“This sculpture honors past, present, and future dreamers. Hopefully, it encourages them and reminds them that achieving dreams is a process. At times it can be difficult, but with a leap of faith, dreams can come true.”

On the 75th Anniversary of the Liberation of Auschwitz, 75 Portraits...

Beck fears most of his music destroyed in 2008 fire