Often capturing the process of artists working in the streets, Craig Schultz aka B4 Flight‘s gritty and powerful images capture the performance aspect of painting that the public often misses. We recently got the chance to talk with the renowned Los Angeles, CA based photographer. Get to know more about B4 Flight and his thoughts on Street Art. 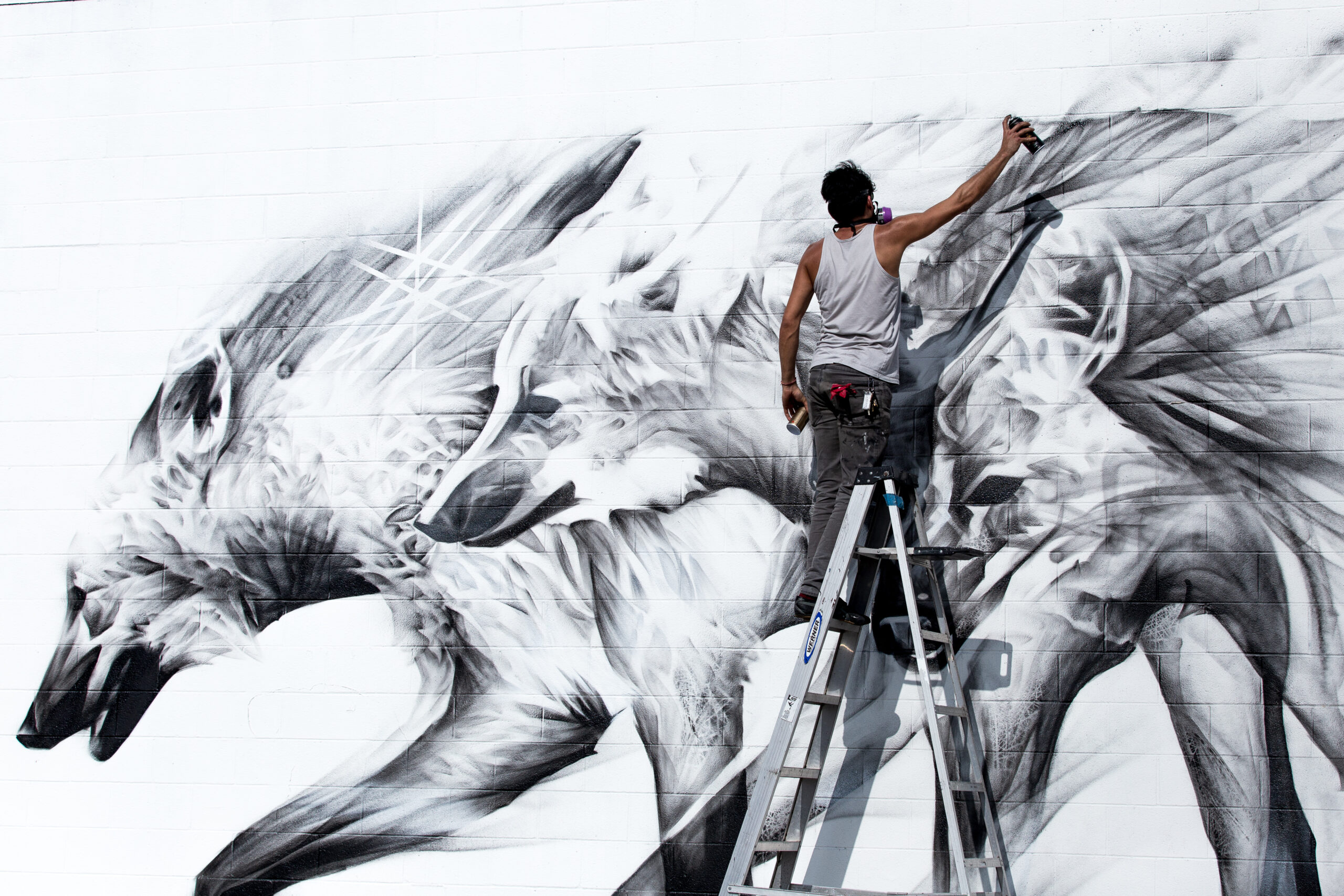 Growing up working inside the hustle and bustle of a newsstand in Los Angeles, I was surrounded by images and people from around the world. It wasn’t until after the tragic loss of my father to suicide in my late 20’s that those images, people and that neighborhood eventually lead me to photography, graffiti and street art.

Though I had done a few TV shows while working at the newsstand like “CSI” and “Without A Trace”as an actor, I woke up one day and decided to leave everything I knew behind, searching for some sort of connection to my father. I left for Europe and traveled from city to city, country to country staying in youth hostels and cheap hotels. I was obsessed with Pere Lachaise, in Paris but the city that had the biggest impact on me, in hindsight, was Berlin, where I ended up staying for 7 months. Walking and snapping pictures with a flip phone, street art and graffiti pieces were everywhere. The angst and symbolism of words and images on walls really resonated with me. From Kripo’s yellow fists to Victor Ash’s Cosmonaut, my walks began turning into mazes filled with pieces like a board game inside the city. I was always hoping to find that one random piece that would stop me in my tracks. 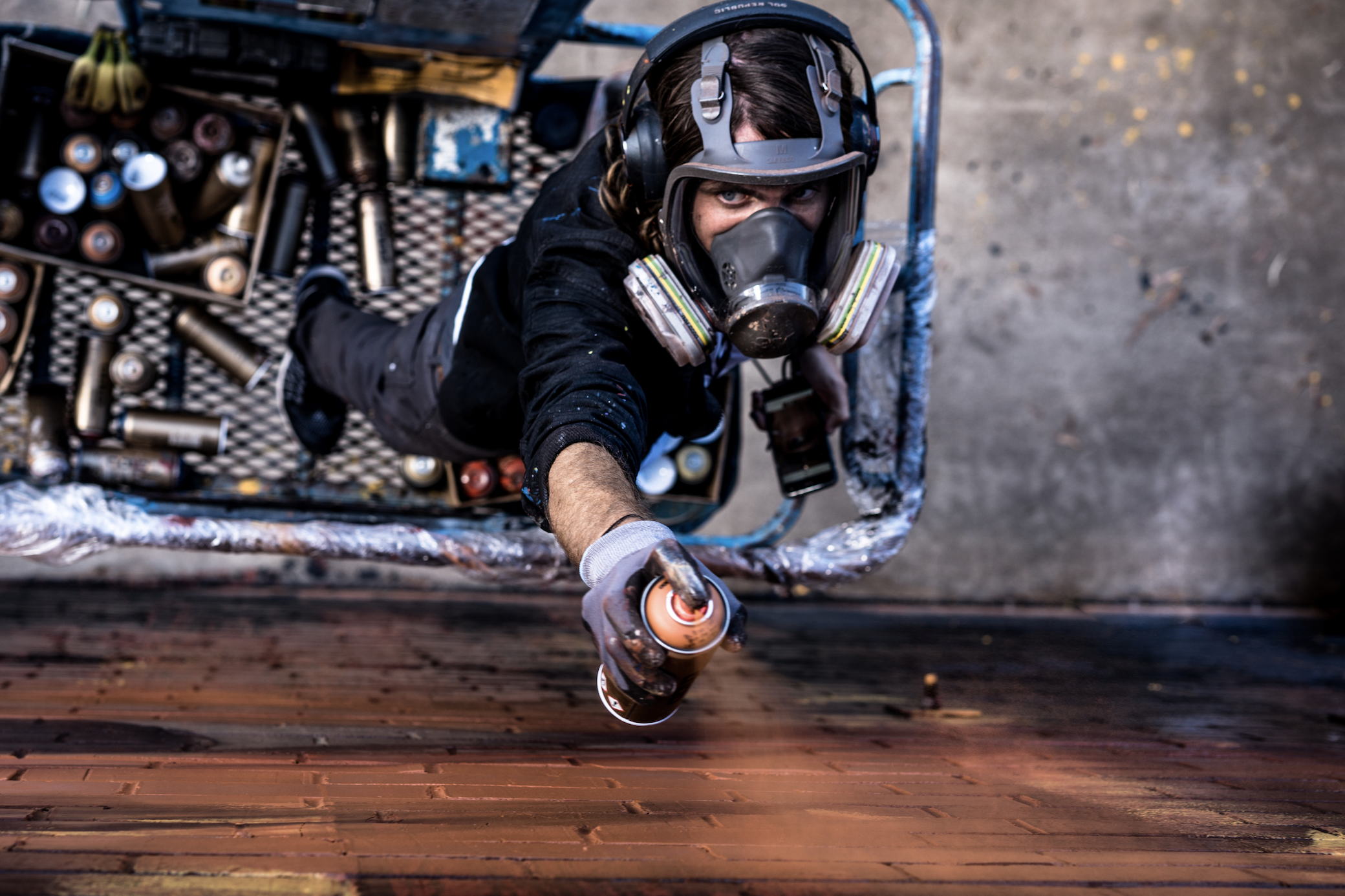 These walks continued for years in New York and finally back in LA. This is around the time Instagram emerged and changed the game for visual imagery, connecting art, artists and photographers everywhere. I began meeting local artists who painted the alleys of my Fairfax neighborhood after posting images of their work. This is when my focus changed to capturing the action of the artists creating and the artist themselves. This new challenge along with encouragement from artists and friends, finally pushed me to purchase a real camera. Something I am forever grateful for.

Shortly thereafter, I came up with the wild idea to walk and document art and artists through the western part of America en route to my childhood home back in the Midwest. Sleeping in IHOPS, youth hostels and even on the streets, I made it through San Francisco, Sacramento, Roseville, Truckee and Reno. The 40 mile hike to Reno on the railroad tracks from Truckee is something I’ll never forget not only because it made my feet to bleed but I think it’s the main reason I have arthritis today. Unable to continue to walk I had to stop there for a while and got into some trouble. I had no choice but to bail to Salt Lake City by train for a few days before ending up in one of my favorite street art and graffiti communities in the world, Denver. I would walk into paint stores or streetwear stores in each city and ask where people were painting, then just show up and shoot. I’m sure people were a little taken back but I still joke to this day with artist Jamie Molina aka @cuttyup about our chance encounter back then. I walked into a store in Denver he was working at with my full pack and gear on after being on the road for too long and asked him where I could photo some painters. Jamie didn’t blink and I ended up shooting Canondill and Brett Flanigan painting in the shop later that night. The adventure finished off in Boulder, where I met up with Angelina aka Starfightera and Gianni. Funny enough, there’s still a mural of me wearing a wolf skull by the two of them off the bike trail to this day. 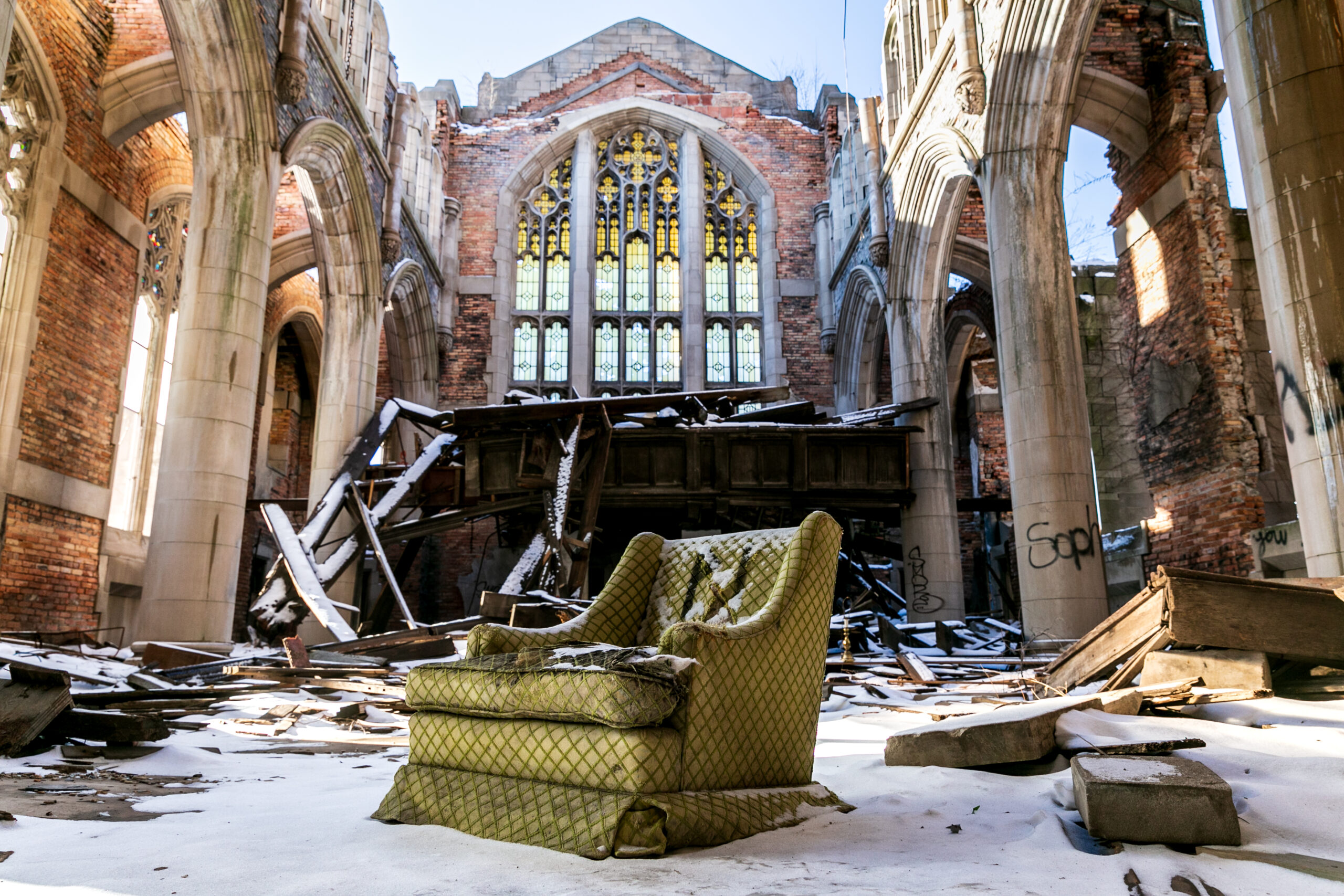 Eventually I did make it home to Milwaukee and the abandoned buildings of the region. I found a tremendous solace in these places and a new found forgiveness. Most anyone who takes photos of graffiti and street art will tell you that you have to go into thick of it in most cities to document the great pieces and that you’ll see a bunch of other things that will open your eyes. Living in Milwaukee for the first time since I was 17, I had no idea what to do after leaving everything behind to pursue documenting art. I was really lost and thought I had made a big mistake until Starfightera hit me up about a different project and I finally had my first job as a street art photographer/documentor. What began as a 3 week road trip with her and artist Findac collaborating on giant murals turned into an epic tour. The project lasted 10 months on an open road across the US in cities like the Salton Sea, Minneapolis, New York and ending in Miami for Art Basel. In hindsight the project was perfectly labeled, ”Innocence to Experience”. I still wish I could go back knowing what I know now and video it.

In the years after, I bounced around learning more and more about my craft. I shot my first single cover for Warner Brothers and a photo I had taken of Adnate painting at Wall to Wall in Australia was published in, “No Cure”, so there were moments that kept the faith going but I knew I would have to take on another challenge to continue doing what I loved as a job. While representing Instagafite in Fort Smith, Arkansas for Unexpected by Justkids, I met Guido Van Helten. His conceptual process, skills and work ethic left a lasting impression on me and inspired me to take on that challenge and do my first minute long video while I was there. Seeing work by an artist you have never been exposed to either randomly on the street or at a festival is one of the most motivating and enjoyable things for me to this day. 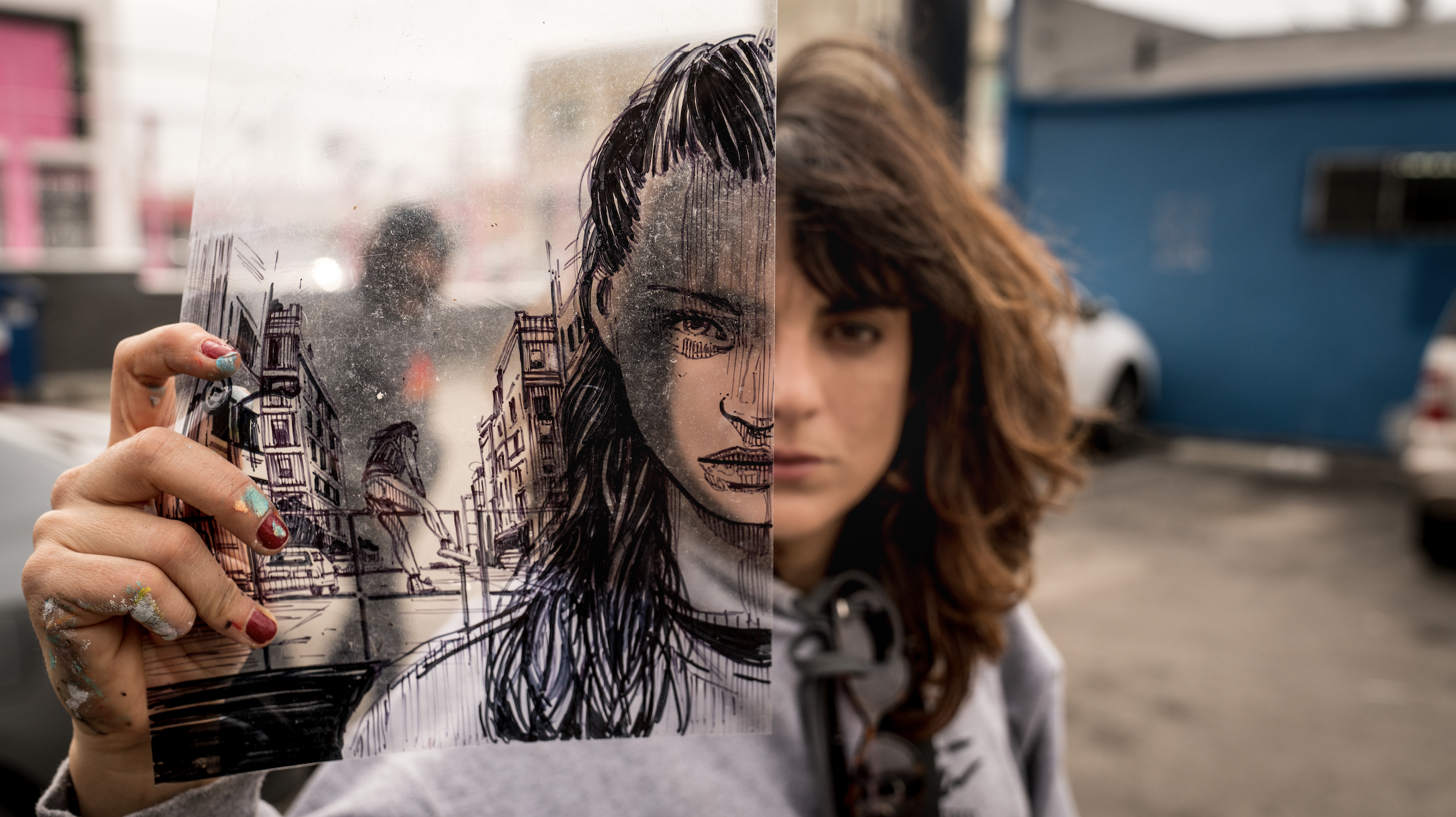 Coincidentally I returned to Denver for Colorado Crush and Milwaukee with Case Maclaim in 2019, my best year so far. Having always wanted to work with Case on a project and having the opportunity to do so back in my hometown was a gift from the street art gods. There are certain painters’ works that I am drawn to and Case is one of them. His use of hands and their movements connected through thought and the realism in which he paints are stunning. While walking to the wall I discovered my own movement or connection to the work by filming people interacting on their own way through the city. I captured a couple walking side by side in front of me until they finally held hands with no stoppage or awareness of me and later as filming continued it completely transcended the experience of hanging with Case and Samira. Finding the pieces of the puzzle that connect each artist to each wall in each city is really the challenge in it for me and until I find that last piece I’m always worried I won’t. In a proud hometown moment, one of my photos of Case painting appeared in Milwaukee Magazine celebrating the new street art movement there and on a professional high moment, I flew to Paris on short notice to film him painting for Chanel and @le19M a few months later. The name represents hands, fashion and craftsmanship, which Case’s pieces and my video paid homage to. That video should be dropping soon. 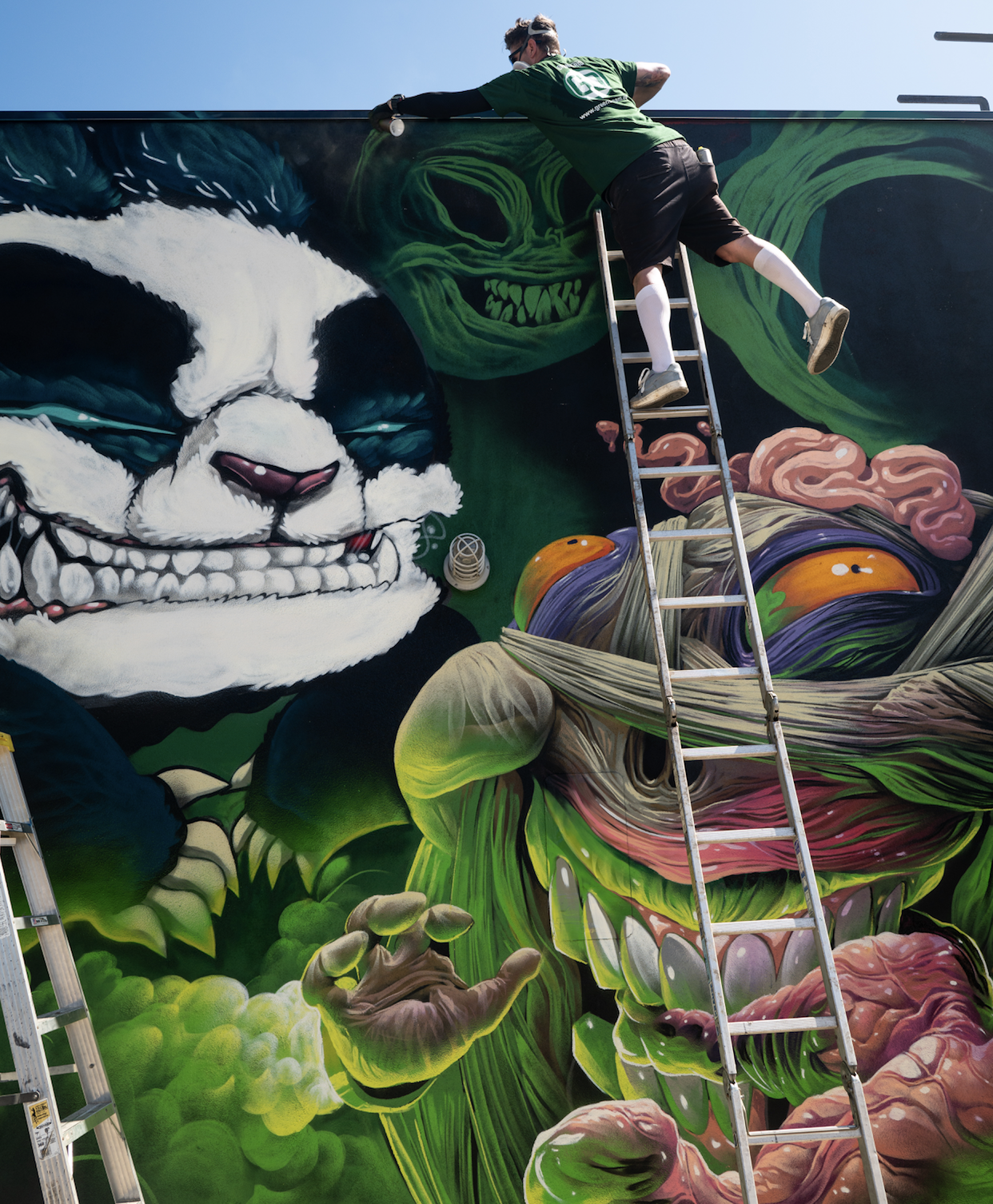 My love for Denver and the artist community there made it equally as special to return to the Rino. From talking shit with Smugone over coffee at sunrise to working with artists like Anna, Birdcap, Casey, Jamie, Taste and one of my favorites Max Sansing, Crush is put together perfectly by Robin Munro aka @_dreadgod_. Robin’s passion and support during the festival for the artists including myself while allowing everyone to create freely is an incredible thing to be a part of. It’s also nice to have the originator of a festival come pick you up in a golf cart at your hotel and take you to a wall late at night with the music blasting. I finally got to film a Secret Walls while I was there too. It’s an insane thing to shoot and is about as close to filming a group of artists painting a legal wall with an illegal energy, in front of a large audience while the clock ticks as if the police are about to come but they’re really not.

Speaking of police and illegals, I’ve made sure to film them whenever possible. Besides the rush, it’s a tremendous high intensity atmosphere to learn in and it gets back to the root of the counterculture and raw expression of it all for me. Filming artists paint trains in the dark in Bangkok while expecting wild dogs or guards to get you will make you sweat but there’s no going back so you might as well film or forever hold your peace. This goes for hitting billboards in LA too. Besides getting up there you have to hope nobody sees you and you still have to get back down. This one time a building owner came out and yelled at Thrashbird and I while he was painting a billboard overlooking the 101. He jammed down, jumped off the roof and took the ladder with him. I ran to the edge and was like,”Yo put the ladder back up because my old ass ain’t jumping with all my camera gear.” He wasn’t thrilled about it and we both thought the chopper was going to appear but needles to say we got away. 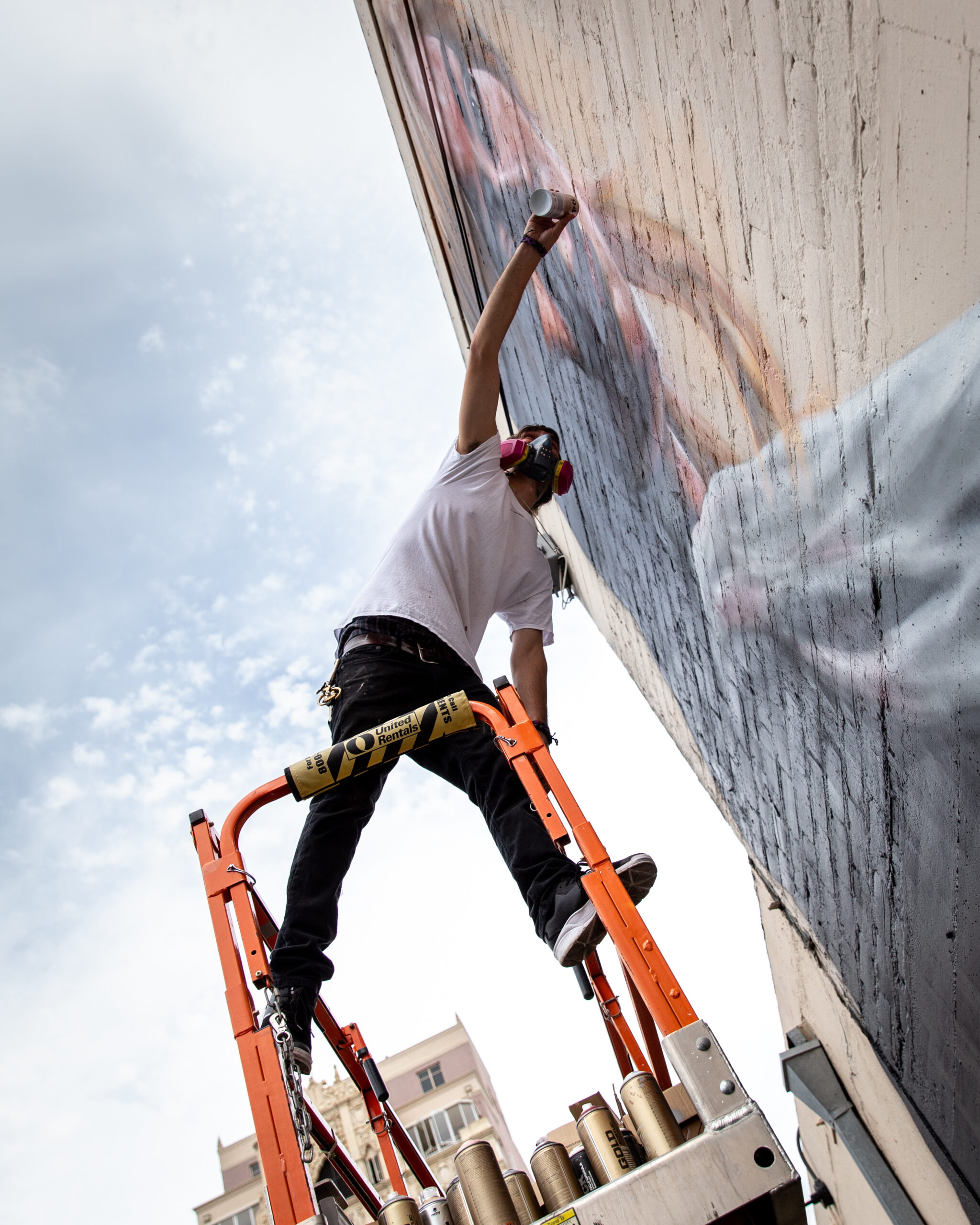 My last project before the present pandemic lockdown was in Dubai for Brand Dubai, the furthest I had ever travelled for work. The project was curated by Rom Levy, another person I had always wanted to work with and included Lonac, Leon Keer and Sagaff. I was already aware of Lonac’s work through a show at Thinkspace and after seeing Leon’s 3d style and Sagaff’s portraits coupled with being in the Middle East, I knew I would have to step it up. Learning from Saggaf about his city, country and culture in a completely different part of the world while getting to know Chez, Leon, Lonac and Rom couldn’t have been a better experience for me so much so that I didn’t even mind missing a flight home for the first time in my life.

A bond formed by shooting in the moment, no resets, weeks on end, creates relationships between artists and photographers that are hard to replicate. Street art, graffiti and walking the streets are what have helped me through many difficult times and brought me to the craft of photography and videography. Looking back it’s something I wouldn’t have imagined 20 years ago while working at the newsstand and now something I couldn’t imagine having not wandered into. The creative processes are really what keep us going through life challenges and hopefully they continue to carry us through this one. I can’t wait to return to the streets when we all get through this pandemic. 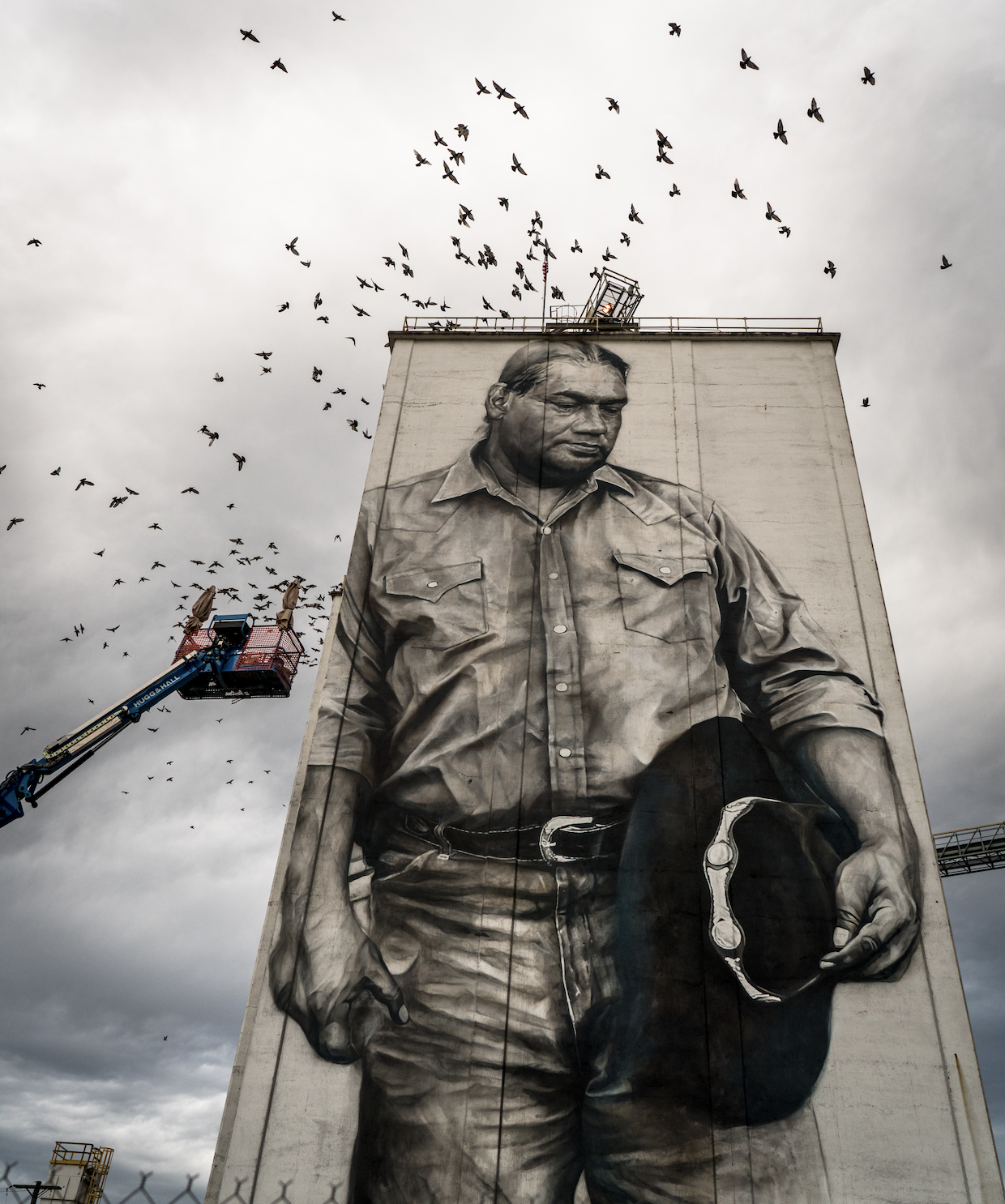 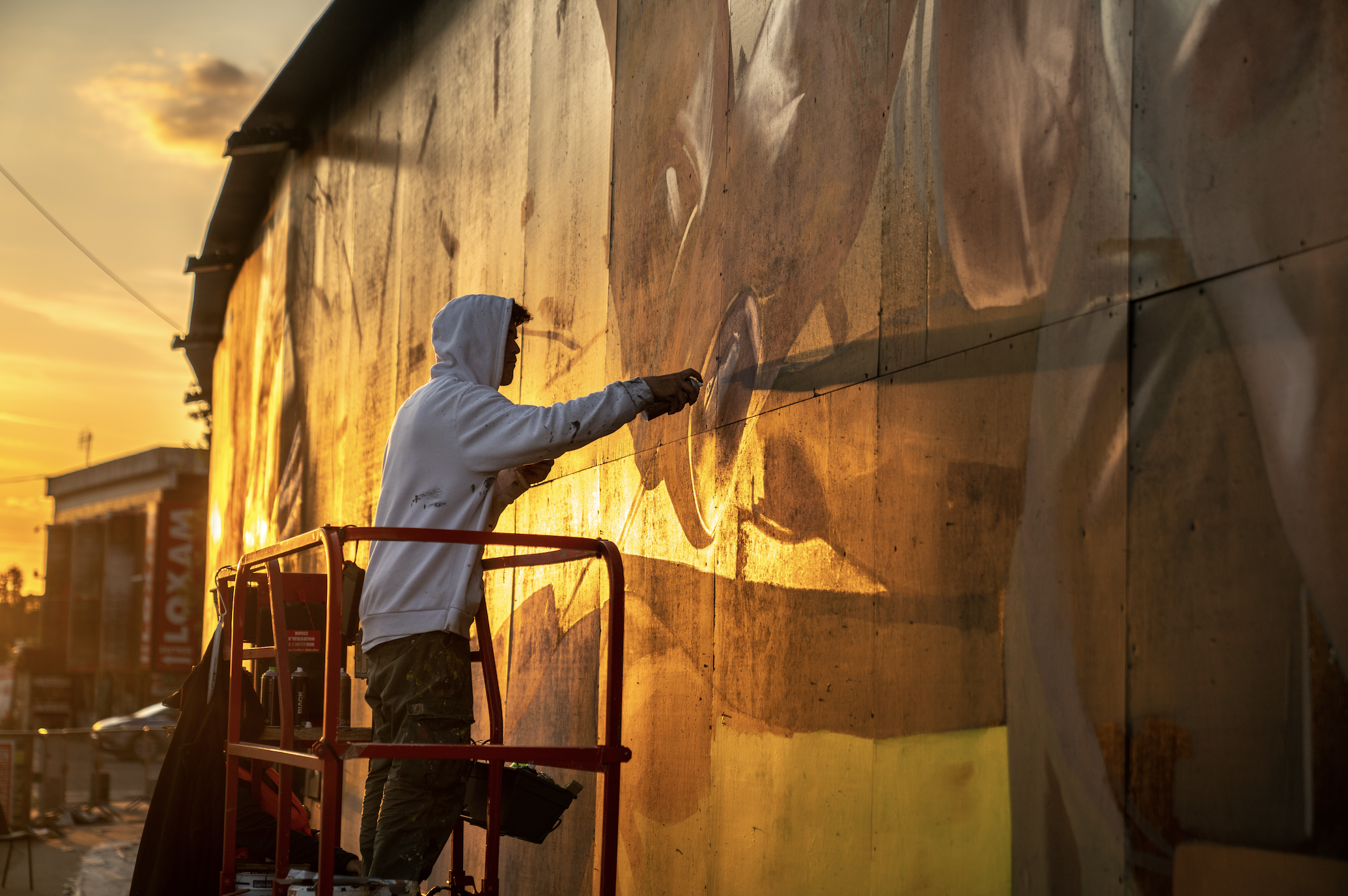 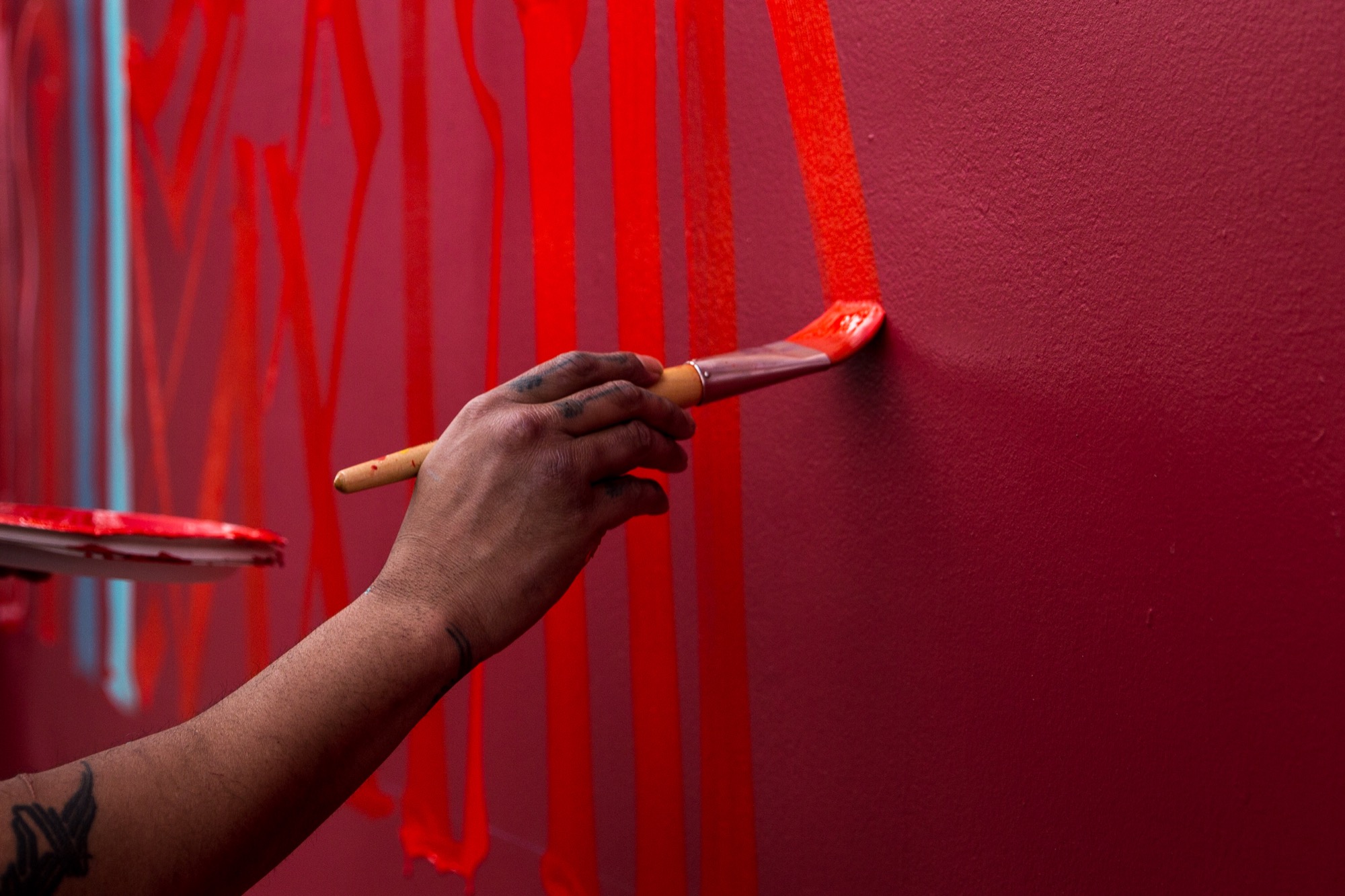 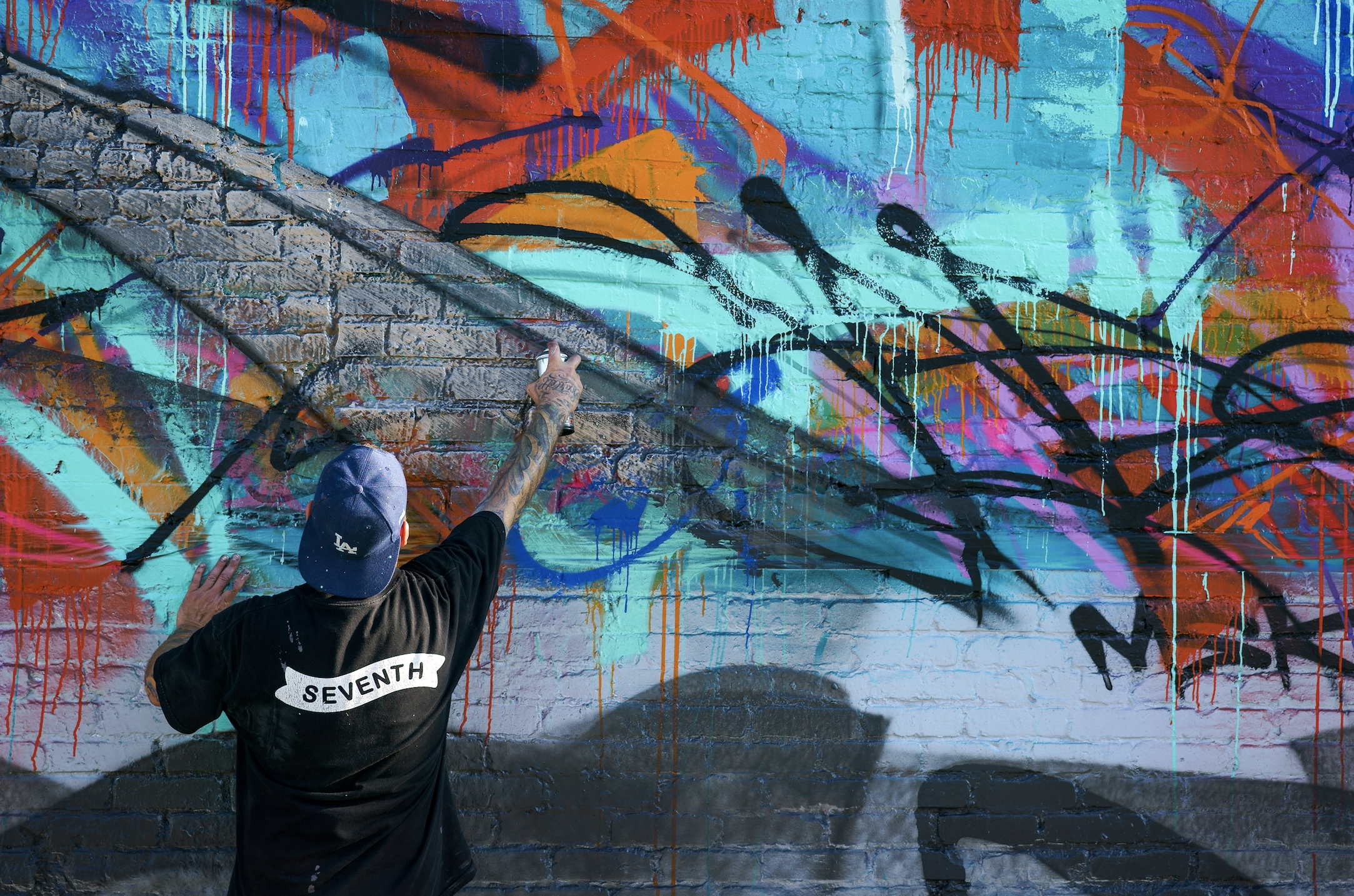 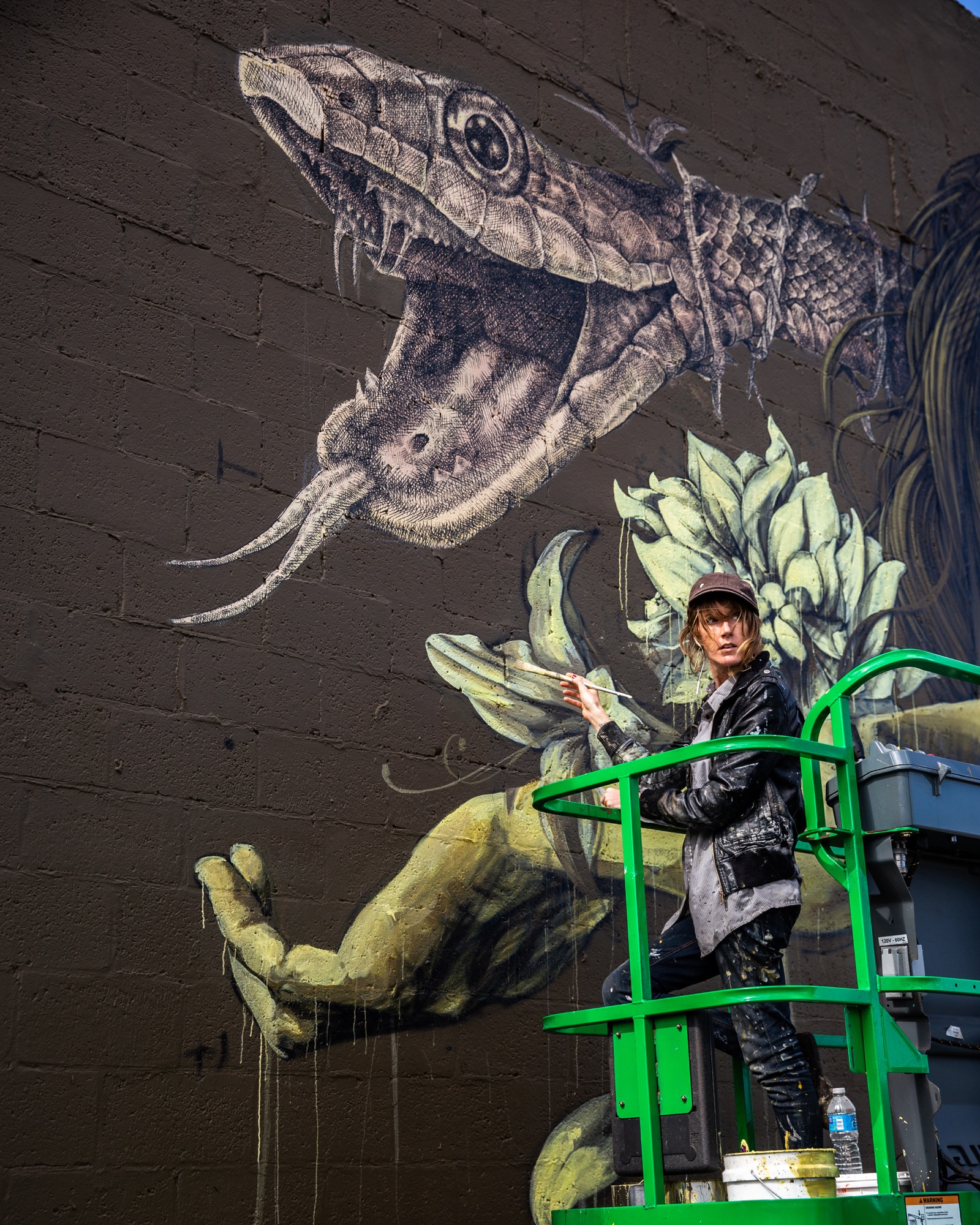 2,500 Museums You Can Now Visit Virtually

Half Full – Artist Insights from Ryan Kohler, an Artist on...