The gala opening for The Art Show, the annual fair put on by the Art Dealers Association of America, has historically provided a smooth landing into the fair-packed Armory Week in New York. The evening, a benefit for the Henry Street Settlement, is the epitome of a civilized affair, with top-notch hors d’oeuvres and liberally flowing champagne. Dealers and collectors tend to be in a good mood, coming off the sleepy winter season. The gala for the 32nd edition of the fair took place on Wednesday night, and this time around the mood was a little different thanks to a newly crowded winter art fair calendar (some of the dealers barely had a chance to recover from the second edition of Frieze Los Angeles, which took place two weeks ago) and, more pressingly, the steepest stock-market dip in two years due to coronavirus jitters and political uncertainty around the upcoming presidential election. 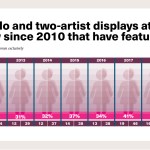 But if attendees were anxious or overworked, it didn’t seem to affect attendance much. The 70 galleries in modestly sized booths running along four aisles in the Park Avenue Armory’s Drill Hall saw plenty of visitors, including Jerry Saltz (art critic for New York magazine), Richard Armstrong (director of the Guggenheim Museum), Tom Eccles (of Bard College), Melissa Chiu (of the Hirshhorn Museum), Terrie Sultan (of the Parrish Museum), Maxwell Anderson (of Souls Grown Deep Foundation), Jessica Morgan (of Dia Art Foundation), and David Schrader (from Sotheby’s private sales), as well as artist Nina Chanel Abney and advisers Kim Heirston and Wendy Cromwell, among many others.

The most visible change to the fair this year was the floor. The Park Avenue Armory spent months restoring its floor and sourced reclaimed southern pine for the purpose. The Art Show is the first fair to expose the floor; in the past they have used grey carpets. The effect is curiously like being on the deck of a ship—it works.

Still, it’s always interesting to see what choices dealers make with regard to the floors in their booths. Some had carpeting, others kept it raw. Petzel, whose booth is the first you see when you enter, solved the problem handily by using the space for an artwork: a mirrored floor by Walead Beshty. Mirrors were more potent at the booth of Luxembourg & Dayan, in a large painting by Michelangelo Pistoletto, La Gabbia (The Cage), for which images of steel bars were silkscreened onto a mirror, giving the impression that the viewer is either a prisoner or the one doing the imprisoning. Pistoletto started the piece in 1962 and, after he finished it in 1974, showed it at Sidney Janis gallery, arranging the panels into an actual cage that viewers entered. Luxembourg & Dayan was more forgiving, placing it along a wall.

Despite—or perhaps because of—its sedate setting, The Art Show opening was not impervious to politics. The most explicitly politically inclined works were to be found at Pace Prints, which had a solo exhibition of large unique collages on panels by African-American artist Nina Chanel Abney. The display, which the artist worked on “non-stop for three months” according to a Pace Prints rep, was very much made for this fair environment, lest we forget—quoting Wikipedia here—that the Park Avenue Armory, completed in 1880, “originally served as the headquarters and administrative building for the 7th New York Militia Regiment, known as the Silk Stocking Regiment due to the disproportionate number of its members who were part of the city’s social elite.”

Abney wants her works to “lead to a bigger conversation,” the Pace rep said. Starting that conversation is a provocative statement accompanying the series, which begins: “Inequality is ever so present and racial tensions are boiling. A collapse is impending and we are all standing on shaky ground. American patriotism has become synonymous with White Nationalism.” The collages themselves contained Abney’s usual vibrantly colorful figures engaged in somewhat ambiguous politically charged activities, such as two black figures exuberantly jumping on a bed bearing a quilt in the image of the Confederate flag. Brian Donnelly—better known as the artist KAWS—has quite the eye as a collector and was checking out Abney’s works, but all five were all on reserve to institutions. They were priced in line with Abney’s paintings: $175,000 for the single panel works, $500,000 for the triptych.

Over at Galerie Lelong, the political message was more subtle: these paintings were made by a refugee. The late artist Ficre Ghebreyesus fled the Red Terror in Eritrea in 1981 at age 16 and eventually made his way to New Haven, Connecticut, where he died in 2012. The largest of Ghebreyesus’s paintings at the fair, from 2007, is a nod to Matisse’s vision of his studio, except this one contains an image of an African sculpture from the collection of Yale University.

Further reference to some of the issues that are powering this year’s presidential election figured in paintings by Ramiro Gomez, a Los Angeles-based artist in his 30s whose parents were undocumented Mexican immigrants. One of the new works in his solo booth at P.P.O.W. gallery depicts a a glossy magazine profile of the art-filled home of Warren B. Kanders, whose company, Safariland, makes tear gas canisters and who left the Whitney Museum’s board after numerous protests decrying their use around the world. Gomez’s painting inserts black and brown figures in hoodies—perhaps art handlers—into the magazine’s rendering of Kanders’s home. Alongside these “magazine” paintings are life-size cardboard sculptures of people who construct and maintain art fairs like The Art Show.

A solo presentation at Sikkema Jenkins & Co. of works by Native American artist Jeffrey Gibson, who appeared in last year’s Whitney Biennial and recently received a coveted MacArthur “Genius” grant, acted as a sort of bridge between The Art Show and next week’s Armory Show, for which Gibson will launch a project as a part of the Armory Show’s Platform program—a video that will appear at midnight every night in March in Times Square, starting with a special performance on March 7. Gibson’s work is a celebration of and call for empowerment of Native American and queer communities, but the pieces in this booth, made from hundreds of glass beads, spell out messages that are potent for anyone in an election year. To wit: “STAND UP BE COUNTED SPEAK UP BE HEARD.”

More subtly, at Jessica Silverman, Dashiell Manley’s paintings are the result of his writing out all the words contained on the front page of a specific daily edition of a newspaper using multicolored watercolor pencils on canvas. The work is very abstract (you can’t read anything), but you can look at the dates and consult the New York Times website: The front page of the July 14, 2019, edition featured headlines like “Quietly Hoarding Millions of Faces Culled from Web,” “Upon Release as a Sex Offender, Epstein Sought to Mend Image,” and “Fear of ‘Career Death Sentence’ Kept Buttigieg in Closet Till 33”

Manley’s paintings are paired with pieces by Japanese Mono-Ha artist Jiro Takamatsu (all made between 1968 and 1971) that come from the collection of Gil and Lila Silverman, a.k.a. gallery owner Jessica Silverman’s grandfather and step-grandmother. A Michigan-based real estate executive who died four years ago at age 91, Gil, along with Lila, built a formidable collection of Fluxus and Conceptual art—they figured for a time on the ARTnews’s Top 200 Collectors list—and were involved with institutions like the Museum of Modern Art, to which they gifted their Fluxus collection in 2008. In 1970, Takamatsu made a number of pieces out of nets; the Silvermans acquired the first four he ever made, which are considered extremely valuable—including the one in the booth, made from black nylon.

Newcomer David Kordansky gallery from Los Angeles has a solo booth of new work by 86-year-old painter Sam Gilliam, who is known for the draped and beveled-edge works he started making in the 1960s. The gallery sold four of them, for $180,000 each, and placed one on hold for a major U.S. institution.

Over at the booth of Wendi Norris were pieces by two artists who have been collected by major institutions recently for the sake of filling in gaps in collections and expanding the canon. The two women Surrealists—Remedios Varo and Leonora Carrington—were friends. Norris recently sold works by both artists to MoMA, and she had in her booth the only freestanding sculpture ever made by Varo, a small fantastical creature called Homo Rodans made in 1959 out of bones from animals (fish, rabbit, chicken, turkey) consumed at a dinner party. The piece is made complete by a manuscript devoted to the creature, displayed in a glass vitrine, and it has never before been shown in America. But private collectors beware: Norris will only sell it to an institution. The same applies to the standout Carrington in the booth, where prices ranged overall from $325,000 to $2.5 million.

Dealer Jonathan Boos had one of the fair’s standout paintings: a 1952 scene of swimmers at a pier by American artist George Tooker. The crystalline painting in egg tempera—one of the swimmers is a self-portrait—has been in the same collection since 1990, when it sold at Sotheby’s for $180,000. Boos has it on offer for $750,000, and it saw a lot of interest.

Luhring Augustine and Fraenkel Gallery mounted an impressive joint exhibition of text-based works by contemporary heavyweight Christopher Wool and black-and-white photographs by icon Lee Friedlander. Wool’s sprawling 1992/2019 eight-frame print on paper, Untitled (Billboard) (Graz), was among the works on offer; while Wool’s text paintings are auction staples, his large-scale print works have seen prices realized in the secondary market between $200,000 and $300,000 in recent years. Iconic works from Lee Friedlander’s Little Screens series of hotel televisions from his time as a Sports Illustrated photographer gave the booth some historical gravity.

In the booth for Jeffrey H. Loria & Co., Picasso’s drawn portrait Buste de femme received energetic attention among prospective buyers eyeing a work with an asking price of $450,000. And many more eyes were darting around the Park Avenue Armory’s spacious environs, taking in the glitzy scene and—maybe—sizing up works to bring home. Time will tell as The Art Show carries on throughout the weekend, until its close on Sunday.

Soundtracks that nearly outshone the films they were made for