While the majority of cultural institutions across metropolitan centers in the United States and Europe closed their doors over the past couple of weeks amid the rapid spread of the new coronavirus (Covid-19), Art Basel carried forth with its annual Hong Kong edition—but for the first time virtually, after it announced the cancelation of the in-person fair last month.

At 6 a.m. Eastern time on Wednesday, Art Basel Hong Kong’s online viewing rooms went live to its VIP guests for the first preview day and will run until March 25. With this virtual option replacing the typical large crowds and networking that takes place between collectors and dealers, this online iteration is a sobering remedy to the major disruptions that the coronavirus has wrought on the global art calendar. And, it seems, there was enough of a critical mass of engaged potential buyers that overwhelmed the website’s servers, causing them to go down for around 25 minutes. 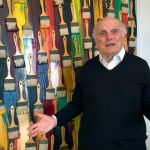 Despite this slight hiccup, as several dealers characterized it, many galleries said that they had heard positive things from their collector bases. Shasha Tittman, who is the director of Lehmann Maupin’s Hong Kong space, said that this online option has been important to those in Hong Kong—and beyond—as international travel has been restricted. “It’s new, and will take some getting used to; it’s not how we’re accustomed to experiencing an art fair,” Tittman said. “The collectors I’ve spoken with, however, were genuinely excited to register and test it out. There’s interest and curiosity, but it’s clear from the initial experience that it requires strong guidance to lead clients to the viewing room.”

A spokesperson for Pace Gallery agreed, adding that the gallery had from clients that context was important in order for them to move forward with purchases. As such, Pace said it would launch curator-led tours of the online viewing room next week that “will be accompanied by interpretative materials to offer a rich contextual lens through which to engage with these artworks.”

For its online booth, Pace had a 1978 Warhol screenprint collage, titled Retrospective (Blue), that features the image of mother-daughter pair Judy Garland and Liza Minnelli and was going for $1 million. Another highlight is a small work on paper by Chinese painter Zhang Xiaogang titled Bathtub (2018) that is on offer at $150,000. Zhang’s surrealist influenced style and dark subject matter has established him as a forerunner in Chinese contemporary art. At the 2018 fair in Hong Kong, a large-scale 2012 painting by Zhang was sold to a Chinese foundation for $1 million.

A David Zwirner spokesperson spoke of interest in the work they had brought to the online fair as being “brisk,” noting that several sale inquiries had come from the gallery’s own customized online platform, as opposed to the one designed by Art Basel. (The spokesperson also said that its clients preferred the design of the Zwirner site to the Art Basel one.) The gallery said that in terms of buyers they found those from Asia being the most active, followed by ones based in the U.S. who had woken up early for the fair, with less participation from collectors in Europe.

Zwirner reported that a Marlene Dumas work sold for $2.6 million to an American client and that a Mamma Andersson painting for $400,000 to an Asian client in the initial hours. By the end of day on Wednesday, the gallery had also sold a Luc Tuymans for $2 million, a work by Liu Ye for $500,000, and a painting by Noah Davis for $360,000. Following a survey of the late artist’s work at Zwirner which ended in February, and an auction record set in Phillips March New Now sale at $400,000, the market for Davis works is expanding.

No stranger to having an online presence to sell art, Gagosian, which first introduced online viewing rooms in 2018, sold a group of paintings by three female artists. They were on sale alongside a black-and-gold work by Georg Baselitz, on offer for $1 million and, as of Wednesday evening, without a buyer. The gallery’s sales included Mary Weatherford’s 2019 giant mixed media painting installed with a neon light strip titled Splendor in Grass. With the online sale presenting the work for the first time at this fair’s edition, the work sold for $750,000 within the first half hour of the VIP preview. Other sales by the gallery included Guidi’s 2019 yellow monochrome work An Instance of Becoming, sold for an undisclosed price, as well as a small scale geometric painting by young Chinese contemporary artist, Jia Aili.

Among the top-tier works Paris-based dealer Thaddaeus Ropac was peddling was Robert Rauschenberg’s Rice Wine Dog, Tuak Hudok-Iban (ROCI Malaysia), from 1990, priced at $1 million. The work was inspired by the artist’s time spent in Malaysia. Ropac’s exhibition also showed a major double portrait by Alex Katz completed this year, priced between $250,000 and $500,000.

Offered at $1 million, Richard Diebenkorn’s Berkeley #21, from 1954, starred in Acquavella Galleries’s presentation on major modernists and postwar staples. The gallery also brought a 10-by-12-inch painting by Wayne Thiebaud, titled Four Slices, 2016–19 and also going for $1 million. Thiebaud works saw a recent onslaught of attention earlier this month with two works by the artist selling for a total of $4.6 million at Sotheby’s.

There tends to be robust interest in Jean-Michel Basquiat’s paintings at fairs of Art Basel Hong Kong’s caliber, but this year’s offerings only included the artist’s works on paper. At Lévy Gorvy, a 1983 Basquiat graphite and oil on paper portrait was priced at $1 million. At Van de Weghe, Basquiat’s Ape drawing from 1984 carried a price of $500,000–$1 million; several Warhol screenprints were on sale for the same price range price range. Last year, Van de Weghe had priced Ape at $4 million, but it went unsold during Art Basel Miami Beach in December, marking a significant decrease in the figures for the auction headliner artist.

Blum & Poe, with locations in Los Angeles, New York, and Tokyo, brought a modest grouping of works this year, with a 2018 work by Yoshitomo Nara priced at $275,000. Another of the dealer’s highlights was Japanese-Brazilian painter Asuka Anastacia Ogawa’s figurative portrait Walking, made this year and priced at $48,000. Ogawa is another of the young primary market stars showing promise, with her work collected by fellow contemporary artists such as Mark Grotjahn and Rashid Johnson; her first New York solo show in June 2019 at Half Gallery sold out before the opening.

As has been a global trend recently, many dealers have been savvy in promoting high quality works by their blockbuster artists in the $500,000–$1 million price range, with few works for more than $10 million on sale. Most surprising about this fair is that, during the preview, anyone with a VIP login could see the prices for many of the works on offer in almost any booth. Typically, dealers play coy about the cost for works.

In an email, Emanuel Layr, who has an eponymous gallery with locations in Vienna and Rome, said, “I think it is interesting and a big step that most galleries are displaying prices, which could create more transparency and will also help people to compare better. But this comes also with a problem: The serious evaluation of prices is hard work and is part of a cost intensive work of galleries. I am for more transparency, and showing prices is for sure customer friendly, but if this information is used by people to try to either resell works … or offer similar works at lower prices, this might be problematic.”

From Minneapolis to Syria, Artists Are Honoring George Floyd Through Murals...

Disappearance of Juanita Nielsen remains a mystery, 45 years on

Smithsonian Is the Backdrop of Barack Obama’s Latest Interviews