Hirshhorn Names Curator of Media and Performance Art
The Hirshhorn Museum and Sculpture Garden in Washington, D.C., has hired Marina C. Isgro to be its associate curator of media and performance art. Isgro was the inaugural Nam June Paik Research Fellow at the Harvard Art Museums in Cambridge, Massachusetts, where she worked on the museum’s 2018 survey of the late video artist, titled “Screen Play,” and also helped the institution acquire two works by Paik for its collection. At the Hirshhorn, Isgro will also hold the position of secretarial scholar, which is part of a Smithsonian-wide initiative to support the work of early-career curators. (Both positions are funded by D.C.-area philanthropists Robert and Arlene Kogod; Robert is on the Smithsonian’s board of regents.) In a statement, the Hirshhorn’s director Melissa Chiu said, “During a time when new media and performance art is increasingly activated as a vehicle to discuss issues of our generation, we are excited to bring in Marina Isgro’s perspective to help ensure these works are presented in thoughtful ways that challenge viewers to understand and connect with our world more broadly.” —Maximilíano Durón 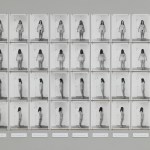 June Art Fair in Basel Postpones Second Edition, Reveals Exhibitor List
On the heels of Art Basel‘s announcement that it would postpone its 2020 edition until September due to the coronavirus crisis, June Art Fair has rescheduled its sophomore exhibition in the Swiss city to run from September 14–20, coinciding with the larger fair. For its second edition, June will return to the Herzog & de Meuron–designed space at Riehenstrasse 90B, a short walk from Art Basel. Among the 15 exhibitors heading to June in the fall are Misako & Rosen (Tokyo), Green Art Gallery (Dubai), Document (Chicago), and Neue Alte Brücke (Frankfurt). The full list of participants can be found here.

Pop Artist Idelle Weber Has Died at 88
Idelle Weber, an artist associated with the Pop art and photorealism movements, has died at age 88. Weber’s works often feature black silhouettes of figures situated against vibrant backgrounds. In the 1960s, she exhibited in the group shows “Pop Goes the Easel” (1963) at the Contemporary Arts Museum Houston and “Contemporary Drawings” (1964) at the Guggenheim Museum in New York, and her work can be found in the collections of the Brooklyn Museum, the Art Institute of Chicago, the Los Angeles County Museum of Art, and other institutions. The New York–based gallery Hollis Taggart, which began representing the artist in 2018, will continue to show Weber’s work.

College Art Association Names New Director
Isimeme Omogbai will be the next executive director of the College Art Association, a New York–based organization that facilitates art history scholarship. Omogbai takes the reins from David Raizman, who had been the CAA’s interim executive director, and she will oversee the organization’s strategy, grants programs, and publications. Omogbai was the first African-American to chair the American Alliance of Museums, and she was previously the board chair of the New Jersey Historic Trust and a trustee for the Newark Museum in New Jersey.

Château Shatto Now Represents Cécile B. Evans
The Los Angeles–based gallery Château Shatto has added Cécile B. Evans to its roster. Evans, who lives and works in London, creates films, installations, and performances about the relationships between capitalism, technology, and human behaviors. The artist has previously shown work at the Whitechapel Gallery in London, the Whitney Museum in New York, the 9th Berlin Biennale, and other venues.

A Colorized Snowball Fight from 1896 Shows Not Much Has Changed...