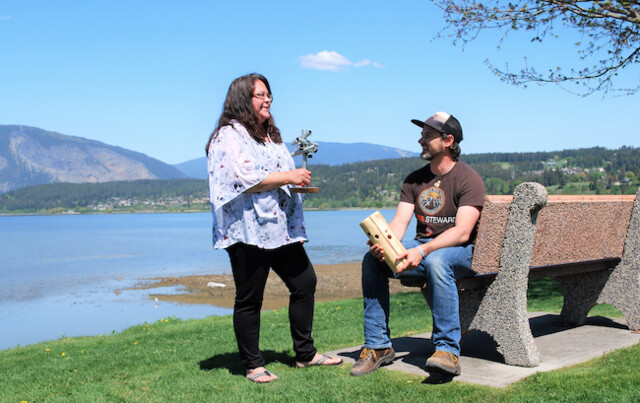 Planning is well underway for the design and installation of 14 Secwepemc landmarks and 100 trailhead posts in the Shuswap.

A call for expressions of interest was issued in January, and applications will be accepted until March 6.

The Secwepemc Cultural Tourism Elders Committee (made up from the four local First Nations) is seeking proposals for a main landmark at the Salmon Arm Marine Park.

A seven-foot-tall rock and metal sculpture is envisioned for the site, including First Nations imagery such as petroglyphs, iconography, visual and written stories.

A trailhead post carving artist and instructor is also sought to lead workshops with youth from Grades 6 to 11 in School District 83. The applicant will work with a Secwepemc storyteller and youth to design and carve petroglyphs in 100 trailhead posts.

Applications will also be accepted for one Secwepemc sculptor (familiar with rock sculptures) and one non-Secwepemc artist (familiar with metal work) to work on six collaborative sculptures that will be situated permanently on trail systems and access points around Shuswap Lake.

The project will raise awareness of Secwepemc traditional territory and culture with sculptures at key, highly visited areas in the Shuswap.

“This initiative is another way for Secwepemc to create more awareness of our presence within our traditional territory. The sculptures can be a collaboration between Secwepemc and settler artists and the mountain names in both Secwepemc and English will showcase Secwepemc language to the visiting tourists and locals alike. Storyboards, sculptures/landmarks placed on trailheads and other key areas will showcase Secwepemc culture and settler history,” says Adams Lake Band Councillor Shelley Witzky.

Australia to get horror ‘studio’ inspired by Roger Corman and Blumhouse

What I know about women with Violent Femmes’ Brian Ritchie

Granite and Quartz Stones Carved to Appear Like Fabric and Clay...