The Independent art fair, a calming cup of fine herbal tea to the Armory Show’s mixologist-concocted Red Bull and vodka, opened its 11th edition in New York on Thursday with a serene spirit suited to its downtown home. A crowd notably less fixated on talk of a certain virus wreaking havoc around the globe assembled when the fair opened its doors in Tribeca, and the day proceeded with an air of tranquility as sun poured through Spring Studios’ enormous windows onto art from more than 60 galleries from near and far.

On the ground floor of the fair, which runs over weekend through March 8, is an intriguingly embodied and disembodied mix of two artists’ work in the booth for New York gallery Gordon Robichaux. From Los Angeles, the 30-something Matt Paweski has a couple of sculptures made of metal and other materials sourced from technological contraptions “related to functional design but freed from the necessity of function,” according to gallery partner Jacob Robichaux. From New York, the 73-year-old Frederick Weston is represented by old and recent work that draws on his training as a fashion designer as well as his past in the Manhattan milieu in the 1970s and ’80s. A pair of white overalls adorned with keys was an outfit he wore at the disco haven Paradise Garage and other New York nightclubs (“a sculpture that was functional,” Robichaux said), and then a large Body Map collage from 2013 culls from a “very large image archive he’s amassed over the last 30 years and catalogued in binders in different categories of race, gender, class issues, color, and other devices for organizing images.” 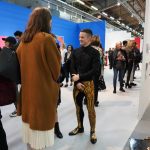 Paweski’s works were available for $12,000 each, while Weston’s were priced between $8,500 and $18,000. Robichaux liked the prospects for all of them during his gallery’s first showing at Independent. “The intimacy and scale is really refreshing,” he said of the fair when asked why he decided he partake. “A lot of our friends who own galleries and participate have spoken highly about not only the collector relations here but also the connections with institutions, critics, and curators. That’s what this fair is really known for, and that’s been the case for us already.”

Upstairs on the fifth floor, the Los Angeles–based Parker Gallery is showing eye-catching works by Misleidys Castillo Predroso, a 35-year-old artist from Cuba. “She was born with severe hearing loss and is deaf and mute,” said Sam Parker. “This is her only form of expression and communication with the outside world beyond her family. One day she started drawing muscular body-builder figures, and her vocabulary of imagery expanded to nursing mothers and figures carrying these mysterious glass boxes. It’s a very pure form of expression.” The characters—painted on butcher paper that the artist cuts into shapes and tapes to her bedroom walls “so they surround her like imagined family or friends”—were available for $3,000 to $14,000.

Nearby in the booth for New York’s Ricco/Maresca Gallery are entrancing drawings made between 1930 and 1955 by Domingo Guccione, an artist born in Buenos Aires who—as a bit of wall text explains—“claimed to be channeling a mysterious force that took a hold of him in bouts of creative energy where his body and mind were not his own.” The intricate visions—“compact kaleidoscopic arrangements where geometric patterns intertwine”—were priced between $6,500 and $7,500.

In a mezzanine level up a short flight of stairs is an arresting video work in a booth for Red Bull Arts New York by Akeem Smith, who cut together footage from Jamaican dancehall parties and paired it with strange, spacey, stammering music accentuated with occasional voices from ghostly MCs. And in another mezzanine is an elaborately adorned booth by New York’s Leslie Tonkonow with work by Saya Woolfalk—whose Afrofuturistic installation (with pieces priced from $3,800 to $45,000) takes up an entire room and even expands into an area with some fancy mirrors and sinks.

A few enterprises at Independent also have booths uptown at the Armory Show—including Richard Saltoun Gallery, from London. “A lot of the artists that we work with are undervalued and underrepresented, and we’re trying to resituate them,” said Niamh Coghlan, a director at the gallery. “Independent is a much younger and open crowd, whereas the Armory is more blue-chip.” To lure different collectors, the gallery is staging a presentation of art made under oppressive states, including a work by Peter Kennard addressing apartheid in South Africa with a photograph of Nelson Mandela and a 1972 work by Argentine artist Edgardo Antonio Vigo that bears the phrase “EL ‘SYSTEMA’ COAGULA RAPIDO LA SANGRE DEL PUEBLO” (“The ‘system’ rapidly coagulates the blood of the people”). “It’s a pretty oppressive moment right now,” Coghlan said of the reason for bringing such work the fair.

Among Independent’s most popular booths on opening day was David Kordansky’s, which is devoted entirely to video and sculpture by Shahryar Nashat, who currently has a show at the Museum of Modern Art. Despite such a sign of status, Kurt Mueller, a representative for the Los Angeles–based gallery, said that Nashat is still “underknown in the U.S.” To try to change that, the gallery was offering pieces priced between $10,000 and $50,000 early, several of which sold during the fair’s first hour.

Air de Paris from France also found success with its booth devoted to Dorothy Iannone, an 86-year-old painter who has been addressing feminist issues for years and who recently showed a monumental work on New York’s High Line. The gallery brought some of her large canvases, which feature an array of women largely posed in the nude. One, titled Always Alluring (1980–2019), was originally made for a senate building in Berlin before it was destroyed. “Unfortunately, they didn’t find the painting, so she did it again,” said Edouard Merino, a cofounder of the gallery, about the work, now priced around $116,500.

As the afternoon continued, Elizabeth Dee—the founder and CEO of Independent—said she was happy with how the first day had progressed. “We’ve been fortunate because we’ve been able to go deep and go broad,” she said. “We have a high level of solo and duo shows, so we’ve gone deep. But we’ve also gone broad in terms of who’s represented—all genres and generations, social and political conversations, and global perspectives. We have works that are almost 100 years old here and then works that have just come from the artist’s studio.”

Of her hopes for a fair that has firmly established itself as an integral part of Armory Week in New York, she said, “It represents quality over quantity, and it’s for knowledgeable collectors, museum professionals, gallerists. We all need to come together with a pace and context more reflective of how artists want their work to be seen. That kind of exchange is as important as all the other elements. We want that to be as strong [and] as rich as what we’re presenting.”

Mantel says her weighty new novel has all ‘the big important...

Boy Scouts May Be Forced to Sell Rockwell Paintings to Pay...