Sculptor Blog
Home Latest News What Are the Most Important Artwork Removals of All Time? – ARTnews.com


Artists removing work from an exhibition (or having it removed for them) is a pointed and often political gesture—and part of a lineage covering many decades to the present. Last year, eight artists called for their work to be removed from the Whitney Biennial in protest of the chair of the museum’s board. Since then, Phil Collins and Ali Yass pulled out of a MoMA PS1 show about the Gulf Wars, and a group of artists removed their art from the Aichi Triennale in Japan over claims of censorship. Meanwhile, a video by Xandra Ibarra was removed from a show of Chicanx performance art in Texas earlier this year after local politicians deemed it “obscene.” 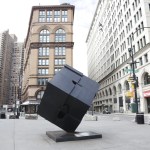 Removals such as these have historical precedents. Below is a guide to some of the most notable artworks that have been removed—either by force or by choice—over the past 50 or so years.

Takis pulls work from Museum of Modern Art (1969)
“The Machine as Seen at the End of the Mechanical Age,” Pontus Hultén’s 1968 group show at MoMA, has been considered a landmark exhibition for its interest in technology. But the show is also major for what happened around it—the removal of an artwork by the Greek artist Takis. Toward the end of the show’s run, Takis picked up a sculpture of his that was on view in the exhibition, claiming that the museum had not consulted him before installing it, and moved it into MoMA’s courtyard. He described the removal as a symbolic action intended to open up conversation between artists and upper-ranking museum staff. After discussion with MoMA’s director, the work was officially taken out of the exhibition for good.

Robert Morris closes show at the Whitney Museum (1970)
Robert Morris removed not just one artwork but an entire show as debate surrounding the Vietnam War raged in America. Many in the New York art scene tried to figure out what role artists could play in protest, and Morris became the leader of an antiwar movement that swept the city’s art world—and even resulted in a widespread strike that saw museums and galleries close. As part of his efforts, Morris shuttered his solo exhibition at the Whitney in an gesture, he said at the time, meant “to underscore the need I and others feel to shift priorities at this time from an making and viewing to unified action within the art community against the intensifying conditions of repression, war and racism in this country.”

Daniel Buren sculpture taken down at the Guggenheim (1971)
Many artists have dramatically transformed the rotunda of the Guggenheim Museum in New York, but none has courted so much scandal as Daniel Buren. His artistic intervention in the space—a striped drape titled Around the Corner that hung from the ceiling and extended almost all the way down—didn’t seem controversial. But some artists who were exhibiting in its midst (in a now-defunct recurring survey known as the Guggenheim International) felt differently. In an effort led by Dan Flavin and Donald Judd, five artists claimed that Buren’s art obstructed views of Frank Lloyd Wright’s sloping architecture—and their own work. They called for it to be deinstalled, and after they got what they wanted, feted art historian Douglas Crimp (then a curator at the museum) resigned because of the fracas.

Ulay moves Hitler’s favorite painting  (1976)
Sometimes removal can be both a form of protest and an artwork in itself. For a “protest action” titled Irritation – There is a Criminal Touch to Art, performance artist Ulay seized his attention on the 1837 Carl Spitzweg painting The Poor Poet: a quaint image of a writer counting out the meters of his verse in a cramped attic that was also Adolf Hitler’s favorite artwork (he even owned a copy of it). Ulay chose not to let Germany forget that fact by marching into the Neue Nationalgalerie in Berlin, taking the work of the wall, and bringing it to the home of a Turkish immigrant elsewhere in the city. Ulay returned the painting 30 hours later, and the temporary theft was documented by his partner Marina Abramović.

Richard Serra’s Tilted Arc deinstalled (1989)
From its initial installation in 1981, Richard Serra’s Tilted Arc—a 120-foot-long arc crafted with Corten steel in Lower Manhattan’s Foley Plaza—was meant to lead to an intriguing reorientation of a viewer’s understanding of a picturesque location. Not everyone saw it that way, however—and after howls from the public, a jury voted in favor of taking down the enormous mass of 73 tons of steel that were unceremoniously hauled away to a government-owned parking lot in Brooklyn.

Adrian Piper pulls out of Conceptualism survey in L.A. (1995)
In 1995, the Museum of Contemporary Art Los Angeles staged “1965–1975: Reconsidering the Object of Art,” a major survey focused loosely on the evolution of Conceptualism. But the proceedings were marred by controversy when one of the sponsors was revealed: Philip Morris, the cigarette company that owns Marlboro. The artists in the show claimed not to have been notified in advance, and Adrian Piper asked MOCA to pull her work from the show and replace it with Ashes to Ashes (1995), a piece focused on her parents’ struggles with—and, ultimately, deaths from—cancer that may have been caused by smoking. When the museum declined, she withdrew from the show entirely.

Tania Bruguera installation shuttered at the Havana Biennial (2000)
Tania Bruguera is no stranger to controversy, having regularly staged boundary-pushing performances that have raised the ire of officials in her home country of Cuba. Originally staged in a fortress used to house political prisoners in the 1950s, her installation Untitled (Havana, 2000) was a darkened space in which viewers could see barely visible nude performers who appeared to be slapping their bodies and video footage of Fidel Castro as they walked across a mat of sugarcane. Brugerua’s consideration of the state of the body under oppressive regimes was closed by authorities hours after opening. Since then, it has been acquired by MoMA, which restaged it in 2018.

Adrian Piper yanks video from black performance art exhibition (2013)
Eighteen years after her MOCA removal, Piper pulled work from “Radical Presence: Black Performance in Contemporary Art,” an exhibition spread across NYU’s Grey Art Gallery and the Studio Museum in Harlem. Piper’s work appeared in the NYU part, where she was presenting documentation of her past performances as the Mythic Being—a male alter ego she assumed to test gender and racial norms. Piper said she felt limited by the show’s purview and suggested that curator Valerie Cassel Oliver organize “multi-ethnic exhibitions that give American audiences the rare opportunity to measure directly the groundbreaking achievements of African American artists against those of their peers in ‘the art world at large.’”

Yams Collective drops out of the Whitney Biennial (2014)
Amid outrage over a work by the white male artist Joe Scanlan, who got black female performers to play a fictional character known as Donelle Woolford, the Yams Collective (also known by the name HOWDOYOUSAYYAMINAFRICAN?) pulled their work from the Whitney Biennial in 2014. “We felt that the representation of an established academic white man posing as a privileged African-American woman is problematic, even if he tries to hide it in an avatar’s mystique,” one of the collective’s members told Hyperallergic at the time.

Shanghai officials strike Ai Weiwei from survey (2014)
Ai Weiwei has frequently accused governments and museum figures of censorship in ways that have affected his standing in his home country of China. In 2014, days before the government-operated Power Station of Art in Shanghai was to stage an exhibition devoted to the winners of collector Uli Sigg’s Chinese Contemporary Art Award, officials in the city yanked Ai’s work—including his famed Sunflower Seeds installation—and dropped his name from the artist list. At the time, Sigg said, “We don’t understand but we must accept that his works will not be in there.”

Animals pulled from Chinese art show in New York (2017)
The Guggenheim Museum faced a widespread outcry when several historically important artworks featuring live animals went on view in a survey of Chinese art. The controversial pieces included Huang Yong Ping’s Theater of the World, featuring a see-through case in which insects and amphibians preyed upon one another; photo documentation of Xu Bing’s A Case Study of Transference, in which pigs were inked with Chinese characters; and a Sun Yuan and Peng Yu video that involved dogs on treadmills. Animal-rights groups widely decried the works, and after an online petition garnered tens of thousands of signatures, the museum pulled them—leading some to wonder whether the protesters properly understood the cultural context for the art on view.

Olu Oguibe obelisk taken down in Germany (2018)
A giant obelisk dedicated to immigrants by Nigerian-born Olu Oguibe was one of the most celebrated offerings at the 2017 edition of Documenta—it even won the artist the exhibition’s top prize. But after the city of Kassel formalized plans to install the work, the work, titled Monument to Strangers and Refugees, was targeted by right-wing politicians who raised doubts about its pro-refugee message and the price of its installation. The monument was removed—but then, just two weeks later, reinstated.

10 artists pull out of the Aichi Triennale in Japan (2019)
Almost from its beginning, the Aichi Triennale began generating controversy when officials made the decision to remove a show-within-a-show titled “After ‘Freedom of Expression?’” That exhibition featured a sculpture by Kim Seo-kyung and Kim Eun-sung that referred to the history of ianfu—Asian women who were forced into sexual slavery by the Japanese Imperial Army. And when it was taken off view, 10 artists—including Pedro Reyes, Tania Bruguera, Minouk Lim, and Claudia Martínez Garay—pulled their own works from the triennial, claiming that the removal of the ianfu piece was a violation of its makers’ freedom of expression. Ultimately, officials relented—and the ianfu work was reinstated along with all the other works that been taken away.